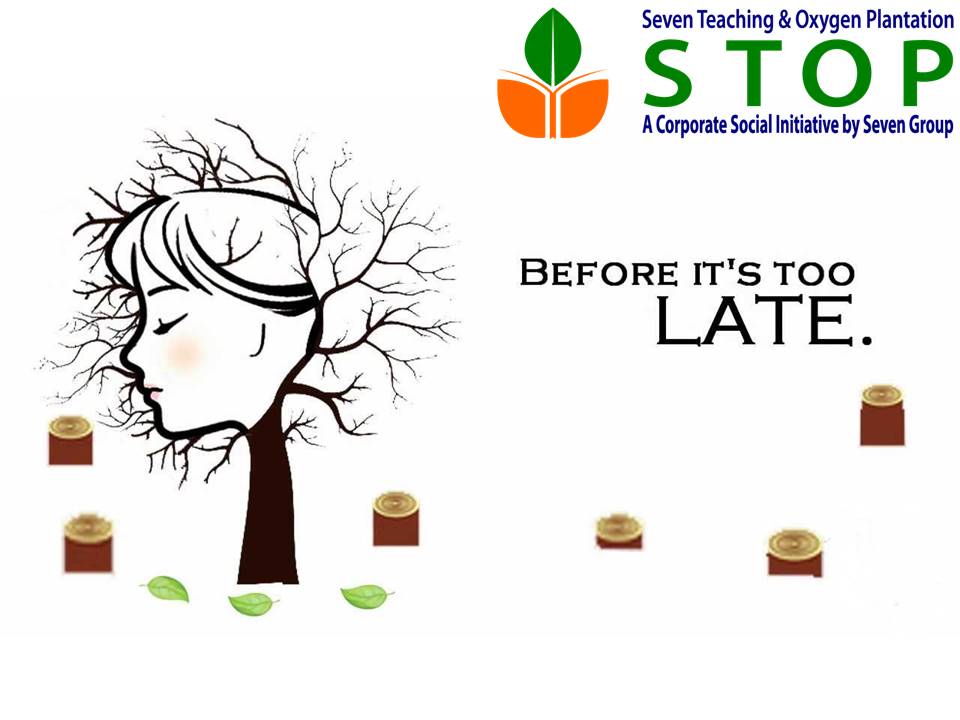 Tree being the longest living species on earth are now the most endangered species. Trees are a vital part of nature, as they give us oxygen, store carbon dioxide, stabiles the soil from erosion and gives life to the worlds wildlife. ( STOP NGO ) Trees also provide us with tools, shelter and medicines. Many research shows that within minutes of being surrounded by trees, our blood pressure drops and heart rate slows down resulting in low stress levels. There are many other benefits of trees.
( Seven Group NGO) Deforestation also known as “The Modern day Plague” is clearing earths forests on a massive scale, 30% of the worlds land area is covered in forest. Between 2000 and 2012, 2.3 million square kilomete0rs (890,000 sq mi) of forests around the world were cut down.  As a result of deforestation, only 6.2 million square kilometers (2.4 million square miles) remain of the original 16 million square kilometers (6 million square miles) of forest that formerly covered the Earth. At current rate of deforestation there would be no rainforest in the  next 100 years. There are many negative effects caused by cutting of trees. Deforestation eliminates a great number of species of plants and animals which also often results in an increase in disease. Loss of native species allows new species to come to dominance. Often the destruction of predatory species can result in an increase in rodent populations which can carry plague. Additionally, erosion can produce pools of stagnant water that are perfect breeding grounds for mosquitos, well known vectors of malaria, yellow fever, nipah virus, and more. Deforestation can also create a path for non-native species to flourish such as certain types of snails, which have been correlated with an increase in schistosomiasis cases. Trees take in carbon dioxide and provide us with oxygen. (Environment Development Organization) Trees provide us with shelter and shade. Cutting down of trees would increase soil erosion. The roots of the trees hold the soil together. One of the main reason for global warming is deforestation. It has been estimated that we are losing 137 plant, animal and insect species every single day due to rainforest deforestation, which equates to 50,000 species a year. The trees trap the green house gases within their barks and emits oxygen. They are the earths natural air purifier. It is noted that the land heats up faster at areas of deforestation .
(Tree Plantation by STOP)Now a days people are realizing the effects of deforestation which is why they are taking necessary actions to control them. In many parts of the world, especially in East Asian countries, reforestation and afforestation are increasing the area of forested land. The amount of woodland has increased in 22 of the world's 50 most forested nations. Asia as a whole gained 1 million hectares of forest between 2000 and 2005. A popular slogan among these days “Plant 10 trees for every tree that has been cut down” are spreading like wildfire. The government and many NGO’s are working to improve the green vegetation around us.